Confession: My area of specialization is not Bais Yaakov. My knowledge of Bais Yaakov’s history comes from my work on this website, in fact. My area of specialization – or at least one of them – is contemporary haredi children’s literature and education. Clearly, there is overlap between the two foci, and that’s why I’ve been working with NaomiSeidman on this project.

Some of the material in the corpus of texts I study is the Olomeinu magazine, published from 1960-2010 by Torah Umesorah. It was marketed to day schools from the beginning, although by the 2000s, the focus had become haredi schools with less attention paid to day schools. That’s part of what I’m tracking in my dissertation.

The process through which I’ve observed this shift is numerous passes through the many issues I have access to, from Torah Umesorah’s incomplete set of scans on their website and from a friend’s loan of her family’s archival collection. I have a spreadsheet where I track the appearance of repeated features, titles, and topics, etc. During this process, I came across one article on Sarah Schenirer. The article is in an issue for which I don’t have the cover, but based on some clues on other pages, I guess that it’s the December 1974 issue. (In the letters that children wrote to the Olomeinu, they mention the previous issues in which they noticed errors. They mention October 1974, November 1974, and Kislev. Since I know that the June 1974 issue was the Tamuz issue, I extrapolated that Kislev matched up with November, which means that the issue in question was Teves/Decemeber 1974. I love this kind of sleuthing!)

The narrative that people tell about their own history is always fascinating. As discussed in other places on this website, the oral tradition that grew up around Sarah Schenirer’s story does not always match the historical records. Not all of the details in the account below are accurate. But it is important to read nonetheless, for what it tells us about how Torah Umesorah in the 1970s thought about the development of Bais Yaakov.

After I noticed that article, I flipped through the rest of the issues I have access to and looked for any pieces that mention Bais Yaakov schools. I found a number of fascinating appearances – some substantial and some brief mentions. I also found two articles about Krakow (spelled Cracow in the Olomeinu), neither of which mentions Bais Yaakov. I found that interesting, because if you mention Krakow to Bais Yaakov girls, they will automatically think of “Sarah, mother of Bais Yaakov.”

Below you’ll find images of the Olomeinu pages on which Bais Yaakov appears. Click each article’s image for an accessible PDF version.

At the beginning of this century, there were no Torah schools for Jewish girls in Eastern Europe. Not only that, but the religious Jews were strongly against the very idea of such schools. Boys must go to yeshiva to learn Torah and girls should stay home to learn from their mothers how to build a Jewish home – that is how everyone felt.

One person felt differently. She was a young girl named Sarach Schenirer. She lived in Cracow, Poland and she workd as a seamstress who kept a diary, read Yiddish translations of seforim, and thought about the girls and women she knew. Modern ideas were coming to Poland. Jewish girls and women couldn’t understand Chumash or sefer, but they were reading all sorts of non-religious and anti-religious books and articles in Polish. A relative once took her to a Jewish girls club for a Friday night lecture – and she was shocked to see one of the lecturers turn on the lights!

So Sarah decided to do something. She started a school for little girls and became their teacher. Many people made fun of her and some were very angry at what she was doing. What right did she have to do something that had never been done before? Who was this young girl to set up a new educational system? Despite the opposition her little school grew. She even got encouragement from one of the greatest tzaddikim (righteous men) in all the world, the Belzer Rebbe, who blessed her work, After that, she got more and more help, especially from Eliezer Gershon Friedenson, an Agudath Israel leader and well-known editor who convinced many other leaders that Sarah Schenirer was right.

Requests began to pour in from other cities: “Please open a school for our girls, too,” She would sometimes leave Cracow for a while to organize such schools. Later on she was forced to graduate her senior class and send them to operate Bais Yaakov schools – that’s what she called them – when they were still in their middle teens. At the suggestion of Rabbi Meir Shapiro she took the next major step – she opened a seminary to train teachers. In the first year, she had a hundred and twenty students!

Sarah Schenirer’s success proved to everyone that there was a tremendous need for Bais Yaakov schools for girls. Nowadays there is hardly anyone who would say she was wrong; if anything there should have been many more people doing the same thing.

What is truly amazing about Sarah Schenirer is that she was absolutely self-taught, yet she was a amarvelous teacher, a fine writer, and an inspiring speaker. Her students were her children- she had no children of her own – and many of them devoted their lives to following her example. Most of her students died under the Nazis and they dies like true heroines. They were unafraid and loyal to Hashem. Once ninety-three of them were about to die. They smuggled out a last letter that ended this way,

“We are not afraid at all. We have only one plea from you: say Kaddish for ninety-three Jewish girls. In a little while, we shall be with our mother, Sarah Schenirer.”

A concentration camp survivor told of a Bais Yaakov student who nursed people in a concentration camp urging them to eat the non-kosher food, even giving away her own small ration to others who were sicker and weaker than she. When she finally dies, it was known that she had never eaten anything that wasn’t kosher.

Saraha Schenirer died on 26 Adar 5695 (1935) when she was only fifty-two years old. That was forty years ago, but she is still alive in every Bais Yaakov school in the world. 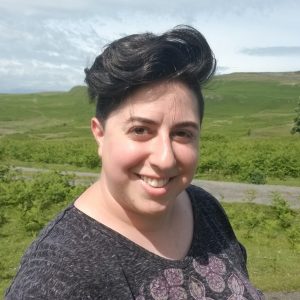 Dainy Bernstein is a PhD Candidate at the CUNY Graduate Center, finishing their dissertation, “Chanoch La’Na’ar: American Haredi Children’s Literature and Education, 1980-2000.” They teach composition and literature at Lehman College.