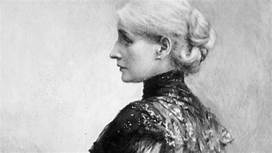 Bertha Pappenheim (1859-1936)  was born in Vienna to a wealthy, strictly Orthodox family. She fell ill in 1880 while looking after her dying father, and was treated by Josef Breuer. According to the history of psychoanalysis, which refers to her as Anna O. (whose identity was revealed in 1953, in the first volume of Ernest Jones’ biography of Freud), she discovered “the talking cure” in the course of her treatment for hysteria. In 1888, Bertha moved to Frankfurt, where most of her relatives on her mother’s side lived. There, she became a writer, a translator (she published translations of Mary Wollstonecraft’s A Vindication of the Rights of Woman, of the Tsenerene, and of Glikl of Hameln, a forbear), a social worker and a feminist. In 1904 she founded the League of Jewish Women (Jüdischer Frauenbund, the largest Jewish women’s organization in Germany), and in 1907 created a home for unwed mothers and their children in Neu-Isenburg. She increasingly turned her attention to East European Jewry, setting up social work agencies to aid immigrants from the East, campaigning to end the the international white slave trade (as the sex traffic was called) among Eastern European Jews, and arguing with rabbis in an attempt to find solutions for the agunah problem.

Bertha Pappenheim’s involvement with Bais Yaakov began when she met Dr. Leo Deutschländer at a 1927 London conference on the international white slave trade, which Deutschländer attended as an Agudah representative. Pappenheim spoke passionately and bitterly about what she considered the failure of the Orthodox rabbinate to address the issue of agunot, a problem connected with that of prostitution. While Deutschländer could not assure her that there were indeed attempts on the part of Orthodox rabbis to enable such women to divorce (or make Jewish marriages harder to contract), he did interest her in Bais Yaakov as an approach to the problem of the sex traffic among Polish Jews, more generally—Pappenheim had also long championed the value of Jewish education for girls. While Pappenheim had traveled through Eastern Europe and met with Hasidic leaders, she had achieved little in the region, and she felt that a grass-roots approach, rather than one imposed from the outside, had a better chance of changing the lives of Orthodox girls and women in the East. Herself an observant Jew for her entire life, she served on the Frankfurt Bais Yaakov committee, followed reports from Poland with interest and spoke about Bais Yaakov in her own lectures. Pappenheim served as a consultant for Bais Yaakov, spending a week in the Central Office of Kraków in 1935 (she arrived shortly after Sarah Schenirer’s death and not long before her own). During her visit, she advised the Bais Yaakov administration on how to structure and professionalize vocational training, and recommended that they shift their focus from teaching to social work and nursing, given the high rates of tuberculosis and other diseases among the Orthodox masses. These recommendations were followed by Ohel Sarah, the vocational training institute of Bais Yaakov in Łódź. Pappenheim died after a protracted illness in 1936, and her home at Neu-Isenburg was shut down by the state authorities the following year.