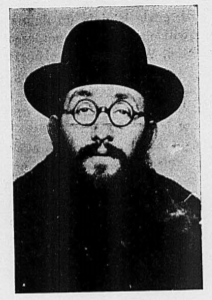 The Agudah activist and writer Eliezer Gershon Friedenson was an influential figure in Bais Yaakov for at least four reasons:

He edited the Bais Yaakov Journal from its 1923 founding until 1939, running the operation from his Lodz offices.

He was the driving force behind Bnos Agudath Israel, which was founded in 1926 by bringing together a few existing groups under a national umbrella.

In 1928, he opened a Bais Yaakov publishing company, publishing textbooks, anthologies, Sarah Schenirer’s Collected Writings and other works, and his own writings, including a children’s biography of Schenirer–Di Mames Tzavo’e [Mama’s Will].

Finally, he was the founding director of the Łódź vocational training institute, which was renamed Ohel Sarah  in 1936 in honor of Sarah Schenirer, and which trained hundreds of students in Jewish Studies as well as programs in dressmaking, secretarial work, bookkeeping, business, childcare, hygiene and nursing.

His involvement with Bais Yaakov began even before the Agudah officially adopted the school system at their 1923 World Congress. He relates:

‘In those days I would travel through the cities and towns of Poland, organizing Agudah groups. Secularists and ideological rivals were not happy about the ways Orthodox Jews were organizing. Everywhere I went they would greet my lectures with a barrage of questions and challenges. I knew exactly how to respond to each of these attacks. But there was one question that stunned me. Once, an opponent asked me: “Where are your girls? They’re in OUR clubs!”

This question tormented me for many days. Until I came to Kraków. My friends took me to Sarah Schenirer’s school. There I had my answer. I understand that it was forbidden to ignore this field, and that the Bais Yaakov schools were the essential point of Agudah activity. For the Jewish people to survive as the people of God, we had to first spread the spirit of the nation among girls, mothers of the generations to come. So I decided to put myself at the service of Sarah Schenirer, and so the Bais Yaakov Journal was born.’

Friedenson was murdered in the Holocaust. His son Joseph (Yosel) Friedenson (1922-2013) carried on his father’s work in the United State, founding and editing the Agudah newspaper Dos Yidishe Vort, and writing about the history of the Bais Yaakov movement.